Posted by Hitoriki on Tuesday, September 24, 2013
advertisement
jQuery UI gives you simple way to use pop-up window. Pop-up windows in jQuery called dialog, and it triggered by the script dialog(). If it is your first time on using jQuery dialog(), I suggest to read my previous post about How to Make jQuery Popup Window? because in this post, I will just giving jQuery Dialog Effect Examples.

The way to do that are by using effect() inside dialog(). This post will show you a very simple examples on how to do that. But first, to make sure you understand this post, you have to be able to make a simple jQuery pop-up window. If not, please learn it from the previous post about How to Make jQuery Popup Window?. 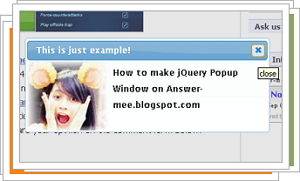 This is the dialog box
Choose effects:

This is the source code:

To learn more about jQuery effect, you can go to this jQuery Effect link. If you have anything to ask, please leave it in the comment form below. That is all for jQuery Dialog Effect Examples, thank you.