Posted by Hitoriki on Friday, September 20, 2013
advertisement
I have played Top Eleven for more than 2 years now. I have played it while it still in beta. But, that is not mean that I am professional. At least I have more experience on playing this game. And now, I want to share my experience about bidding players on Top Eleven.

I see there are so many false assumption on bidding players on Top Eleven. For example, like how to decide which player they are going to bid, when the right time to bid players, and many more. Once again I must say that I am not professional, this is just based on my personal experience. 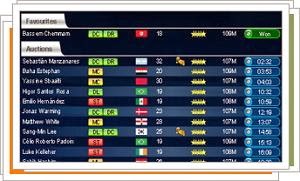 I see on Top Eleven forum, many users suggest to bid a 4 stars young players, well I think it is wrong. Let's see, if you are go to 4 stars player that is mean you are competing with users on same level as you and a level below you. But if you go for 5 stars player you will competing with users on the same level as you and a level above you that I think is not as many as the users on a level below you, and you have a better player. So, I suggest you to go for 5 stars player.

5 stars player is a must for me. Other thing to decide for bidding players on Top Eleven are Quality, Age and Roles.

5 stars players on your level will have a range of quality value. For example on level 24, 5 stars player quality is between 135 to 139. The users who knows this will always bid for player with 139, so that is mean that the player with this quality will have more bidders than players with the quality below it. Make sure you have enough tokens to bid on these players or just go with 138 or 137 if you have less tokens.

I think you already know that the younger the players you bid, the more bidders you will compete.

Of course, more users will bid for the players with more than one role.

3. What is the best time to bid players?

The users who go for bid wars absolutely the users that have many tokens. It is usually players that buy tokens. The worst experience for me on bid players was when I go one-on-one bid war and I lost more than 30 tokens and also lost the bid. I never buy tokens, so can you imagine how long does it take to me to collect that tokens and it is worth for nothing?

5. What is your best bidding tactics?

After decided for the player you want to bid, now time to go to bid. I will go for first bid at 1 minute or 30 seconds remain. If I am not the first bidder, I will immediately bid again when it is entering the 2nd round. But if I am the first bidder, I will wait until the last second possible to to bid again on the 2nd round. This tactics of bidding make the other bidder think that we are not going to bid again. For me, I will just spent maximum 5 tokens for a player on bids.


That is all for my tips and tricks, I will update this post again if I found something interesting about Top Eleven Bidding Players Tips and Tricks. As I mention above, I am starting bid player when the league entering round 5, while waiting for that, the best thing to do are by negotiating players. The next post we will talk the best way to negotiating players on Top Eleven Be a Football Manager.