WhatsApp Video Call for Android first appeared on May for Beta users but it suddenly disabled without reasons and put back into development. Now it is enabled by default again for beta users, it was first announced enabled by default on Windows Phone.

As far as I know, Whatsapp Video Call feature is also have been enable on iOS (Whatsapp Beta) and Windows Phone Beta version. 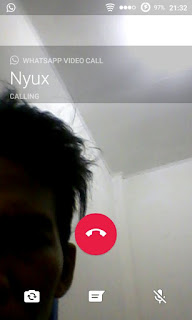 Take a look to this tweet from @WABetaInfo about Whatsapp Video Call feature on iOS.


For now, you can only use the Video Call feature with other users who use the beta version too. Hopefully it will be ready for official release anytime soon. Take a look at the following video about How to use WhatsApp video call feature.


On that video above, users only able to make a video call to someone that also use the WhatsApp Beta Version and return "Couldn't place call" for users that use the official release version.

Similar to How to enable Whatsapp Video Call Feature: